Overview:
In this next segment of my experience with Robocode, I developed a competitive robot called RobotFighter that could reliably beat most non-advanced robots.  Secondary objectives were to improve my Java and Eclipse skills, and also to improve my ability to write code that adhered to standards. 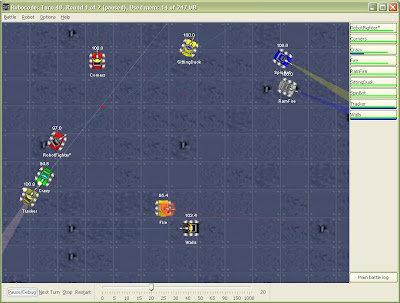 Targeting
RobotFighter scans in a right-ward direction at 45 degrees per tick and with a wide arc.  Upon detection of an enemy bot, it fires a bullet and moves in a random direction.  Due to the limitations of Robot class, all actions are performed in serial, and thus, RobotFighter cannot maintain a perfect lock on the enemy bot.

Firing
Since RobotFighter uses a linear firing system, it only fires when it is within 500 pixels of an enemy bot.  It also varies the power behind its shots in proportion to the distance to the enemy bot.  The strength of its bullets are 0.9 at a distance of 500 pixels, and 3.0 (the maximum) at distances of less than 150 pixels.

Results:
RobotFighter was tested against 8 different sample robots in 100 rounds each.

The movement system worked nicely in this match-up.  RobotFighter evaded most of Wall's bullets until it wore itself down to 0 energy.

The movement system overwhelmed RamFire's slow rotation rate.  RobotFighter backed away from RamFire in sharp angles, leaving it vulnerable to fire while it rotated.

RobotFighter's linear firing system does not work well against bots that do not stop.  It is also inaccurate against circular movements.  If this robot were to be redesigned, it would have a pattern-finding system to predict the enemy's next movements.

Similar to the match-up against Walls, RobotFighter evaded most of Crazy's bullets until it wore itself down to 0 energy.

RobotFighter is extremely effective against opponents that remain still for long periods of time.

Like Fire, Corners remained still in a corner of the map, leaving it completely vulnerable to all bullets.

Tracker and RobotFighter used very similar movement systems.  The difference was that RobotFighter evaded more bullets by moving in non-right angles and it fired more powerful bullets up close.

SittingDuck literally did nothing but sit, so a 100% win percentage was expected.
Lessons Learned:
Download:
A packaged version of RobotFighter is available here.
Posted by David Lin at 5:57 AM 1 comment:

Robocode is an open source educational game designed to help people learn the Java programming language.  Much of the work is already done behind the scenes to provide the GUI and screen overlay.  One simply needs to refer to the API to begin coding their robot to move, use its radar, and shoot. 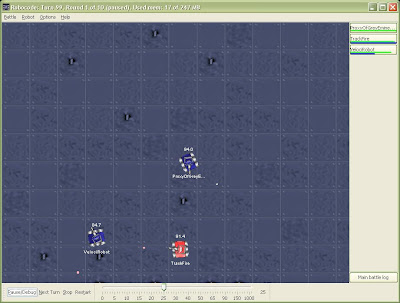 To learn basic movement, targeting, and firing behaviors, I programmed numerous robots to perform the following:


I successfully coded all behaviors.  My implementations are available here.

At first, I was frustrated at the lack of a definitive guide that detailed specific robot behaviors and its code.  The wiki was not particularly helpful as the information was scattered throughout dozens of pages and mostly contained advanced behaviors.  The API became my golden guide from Position04 and onwards.

Position04 and Position05 presented the greatest challenge due to the necessity of trigonometric concepts and the awkward "compass" system that Robocode uses.  I completed Position04 by simply having the robot move in right angles until it reached the center.  In Position05, I used trigonometric functions such as arc tangent to have the robot move directly to its destination.  A problem I encountered was that the body of the robot is considered to be a square, not a single point.  Thus, my robot would occasionally run into a wall before hitting the corner of the map.

Other robots that exhibited interesting behaviors were Follow02 and Boom02.  I learned that by adjusting movement and radar rotation rates, I could affect how well the robots performed their tasks.  For example, I discovered that a radar rotation rate of 45 degrees per tick and 100 pixels per movement resulted in a potentially optimal robot that could quickly track down another robot.

Since positioning and predicting robot movements are the main strategies in Robocode, a competitive robot would strike a balance between radar rotation and movement rates.  In addition, techniques such as statistical analysis would be beneficial in predicting enemy movement patterns.
Posted by David Lin at 5:56 AM 1 comment: